April 1, 2015 Copenhagen:  Ownership of a radio station has traditionally been limited to those who could afford to construct immense steel towers, but Loof Lirpa, an engineer from Radio Gnisten in Copenhagen, has devised a new low-cost method of sending the music channel to the city.  His new company, SpejlVikle, markets a device that can transform radio waves so they can travel through the earth in the same manner that they once traveled above ground.

Though Danish regulators recently opened up opportunities for small scale community broadcasters to receive licenses, the cost of construction has frequently meant that even those who have received government permission have not been able to get on the air. Existing towers frequently charge hundreds to thousands of Krones for rental of a spot on their towers.

“Ever since Marconi, radio engineers have unimaginatively thought of the earth as a barrier, and the air as a transmission medium,” said Lirpa in an interview on Wednesday.  “It took a bit of complicated math, but using quantum transposition, our device has reversed this dynamic and antennas can radiate freely up to the surface at a similar phase and beam tilt to their analogues above ground”.

Stymied in their attempt to get zoning permission to erect a tower in their neighborhood of Vesterbro, Lirpa borrowed an earth-boring machine to dig a core sample in the backyard of their studio to the same depth as the proposed 30 meter tower.

A collinear-stacked array coated with non-conductive grease was then lowered down the hole by its coaxial cable, and the hole was refilled with loosely packed sand to establish a non-conductive path between the antenna and the surrounding soil. Polarity of the output feed from the transmitter was quantum- inverted in a fifty centimeter chassis before being delivered to the coaxial cable.

Upon turning on the transmitter, it was discovered that the coverage was exactly equal to the predicted coverage of an antenna mounted upon a thirty meter tower. Danish regulators have evaluated the results and are satisfied that this arrangement meets the standards of Danish telecommunications law. “Given the quantum mirroring effect of the burial of this antenna, we shall permit radio operators to establish their facilities in this manner,” said Anna Tennekegaard, Chief Government Technologist at the Danske Erhvervsstyrelsen, Telekommunikation Filial.  “However, we shall be vigilant to insure that no stations are burying their antennas deeper than their licensed Height Above Average Terrain would have allowed, in the interest of preventing greater than predicted coverage and potential interference with other services.”

Noah Vale, of Acme Antenna Service based in Topeka Kansas, has promised an investigation into the feasibility of this cost-saving technology for use in the US. “Questions of isomorphic quantum entanglement are definitely above my pay grade. But I certainly know how to dig a hole and drop an antenna down it. Hell, why not?”

In case building your radio station using the SpejlVikle technology does not work out for you, get in touch with pete tridish at international media action (imarad.io) for a somewhat less innovative, but assuredly more dependable approach. We can’t compete with burying your antenna, but we’ll do our best to make radio station construction affordable for your non-profit group. petri@imarad.io

OK, PLEASE NOTE THE DATE ON THIS POST.  Don’t feel bad, it even fooled some radio engineers too! 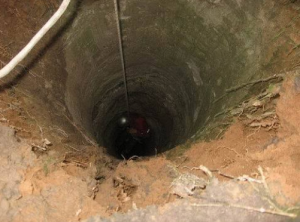 lowering antenna into the earth