Home Newsworthy Fun in Montreal at the AMARC 30th Anniversary

Fun in Montreal at the AMARC 30th Anniversary 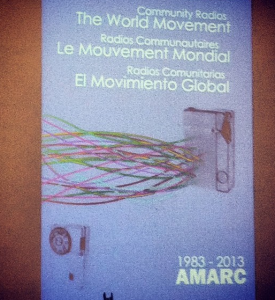 Pete Tridish and April Glaser drove to Montreal to attend the 30th Anniversary Conference of AMARC, the World Association of Community Broadcasters. AMARC is officially based in Montreal and it was wonderful to see old friends from community radio stations around the world as well as to meet new people who have established exciting stations in places like South Africa, India, and Western Canada.

Our own board member Elizabeth Robinson spoke at the conference as a representative of her station KCSB in Santa Barbara, California and former AMARC board member. Pete Tridish and Sophie Toupin visited the Oka radio station in Quebec to help with some transmitter troubleshooting.