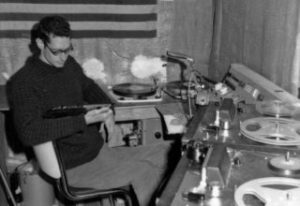 Lorenzo in the control room of KRAB-FM in 1963 via krabarchive.com

As we propel further into the future, we never forget the spirits, the energy, and the presence of everyone who’s pioneered a way of life. Each and every one of you holds this power. Lorenzo Milam held that power too. He was an integral part in radio technology and transmissions. We’d like to hold space for him and commemorate his legacy.

In the 1950s, Milam encountered and later worked at KPFA run by noncommercial Pacifica Foundation in Berkley. He then founded the legendary free form KRAB-FM in Seattle in 1962. He helped start over a dozen listener supported stations in the 60’s and 70’s that were subversive, diverse, and unpredictable. We call them community radio stations now. KRAB was responsible for starting tape exchanges between stations to share programs. They gave us glimpses of freedom through the airwaves.

Most known for his book Sex and Broadcasting: A Handbook on How to Start a Radio Station for the Community, Milam provided crucial information on maintaining a station and the legalities behind dealing with the Federal Communications Commission. The book prompted many organizations to apply for and receive broadcasting licenses, opening up the spectrum of voices on the air. Having prodded the FCC on multiple occasions, his quest to liberate the airwaves from the same people who pay to regulate themselves has forever left a ripple in the system. “They submitted RM-2493, a Petition for Rulemaking at the FCC that requested a freeze on issuing new construction permits within the noncommercial band until the FCC could determine clear criteria for who could apply for these restricted frequencies.” writes Nan Rubin for Current.

“Whether they planned it or not, they unleashed such a firestorm at the FCC that the Commission has still not recovered.”

The article in Reason quotes Milam from “an angry rant he published in KCHU’s program guide in 1976, bristling at an ad campaign sponsored by the Free Enterprise Institute. “Most of us sincerely believe in Free Enterprise,” he declared:

“We value what it represents for the individual. Hell, most of us would give our eyeteeth to live in a country that honored and believed in Free Enterprise. But when we are faced with the wrenching knowledge that United Fruit runs the CIA, ABC runs the FCC, Lockheed runs the State Department, Mobil Oil runs the Texas branch of the legislature, and the telephone company runs them all: when we are faced with that bitter knowledge—we are forced to the droll conclusion that we could only have free enterprise if the big corporations would get the hell out of the way. As long as they write the laws they work under, frame the taxation rulings that they are to follow, infest the regulatory commissions that are supposed to regulate them: as long as they do this so richly and so well—the rest of us won’t even have a crack at “free” enterprise. It’s just too damn expensive.”

He spent the last half of his life in Mexico in Tijuana and Oaxaca. The main reason being that the way of living there has little to no restrictions or censorship. You can build a small house on a little piece of land where others will also migrate and slowly build community. The only thing you have to do is pay off the police and government to stay off your back. This allows communities to form and hold their space however they please, a fascinating experiment in alternative living.

We continue, to this day, to ward off the evil bestowed to the community by the FCC but we could not have gotten this far without the bold and unapologetic actions of people like Lorenzo Milam. Thank you.